Finding the Lexicographically Next Permutation

In this post, I discuss the solution to the LeetCode Problem, titled Next Permutation.

Given an array of integers, nums, rearrange the elements of the array to produce the “lexicographically next greater permutation of numbers”.

If there is no such permutation possible (i.e., it is the greatest lexicographical permutation), the array should be rearranged to its “lowest possible order” , i.e., ascending order.

What is lexicographical order?

Lexicographical order is a generalisation of the ‘aphpabetical order’ we see in dicitionaries. Words in a dictionary are ordered by the comparing alphabetical order of the letters, starting with the first (or left-most) place. By going left-to-right, we compare the corresponding letters of each index. We stop at the index, where the letters do not match. The word containing the letter which is alphabetically superior (at that particular index) gets a higher order.

For example, between the words, peek and peak, the word peak will be placed first, because a > e in the alphabetical order.

Not just dictionaries, lexicographical order is used in non-negative number systems as well. So, when we want to find the next permutation in Lexicographical order, it is similar to finding the next non-negative integer on the number scale (achieved solely by rearranging the existing digits). To simplify the explanation, I will use the example of integers, in the following part of this post.

In order to find the ‘next’ integer, we need to swap the positions of a specific pair of digits.

The pair of digits being replaced should not be equal to each other because otherwise we will end up with the original integer itself. Thus, one digit will be smaller (lets call it Smaller Candidate) and another will be greater (Larger Candidate).

Also note that, to find the ‘next’ integer, we need to find an integer, that:

Also, the Smaller Candidate should be the right-most digit, as long as we can guarantee that there is at least one digit to its right that is greater than itself. This is to ensure that we stick to the smallest-integer-greater-than rule.

Armed with this knowledge, we do a right-to-left sweep. At each index, we check if the digit to its left is smaller than itself, i.e., nums[i - 1] < nums[i]. The first pair that satisfies this, gives us the Smaller Candidate: namely, the nums[i - 1] candidate.

Now, that we know the Smaller Candidate and the Larger Candidate, we swap them.

Re-arranging the Rest of the Array

What happens when there is no Smaller Candidate?

If we are unable to find the Smaller Candidate, it would mean that we have completed the loop but could not find a single pair of digits that could satisfy: nums[i - 1] < nums[i]. In such a case, as required by the problem, we should re-arrange the entire array into ascending order. But, as every digit satisfied the aforesaid condition, they are all arranged in a descending order. So we should simply reverse their arrangement to arrive at the descending order.

Let’s take the example of [2,3,6,5,4,1]. First, we should find the Smaller Candidate, by comparing each pair of elements, starting with 1. 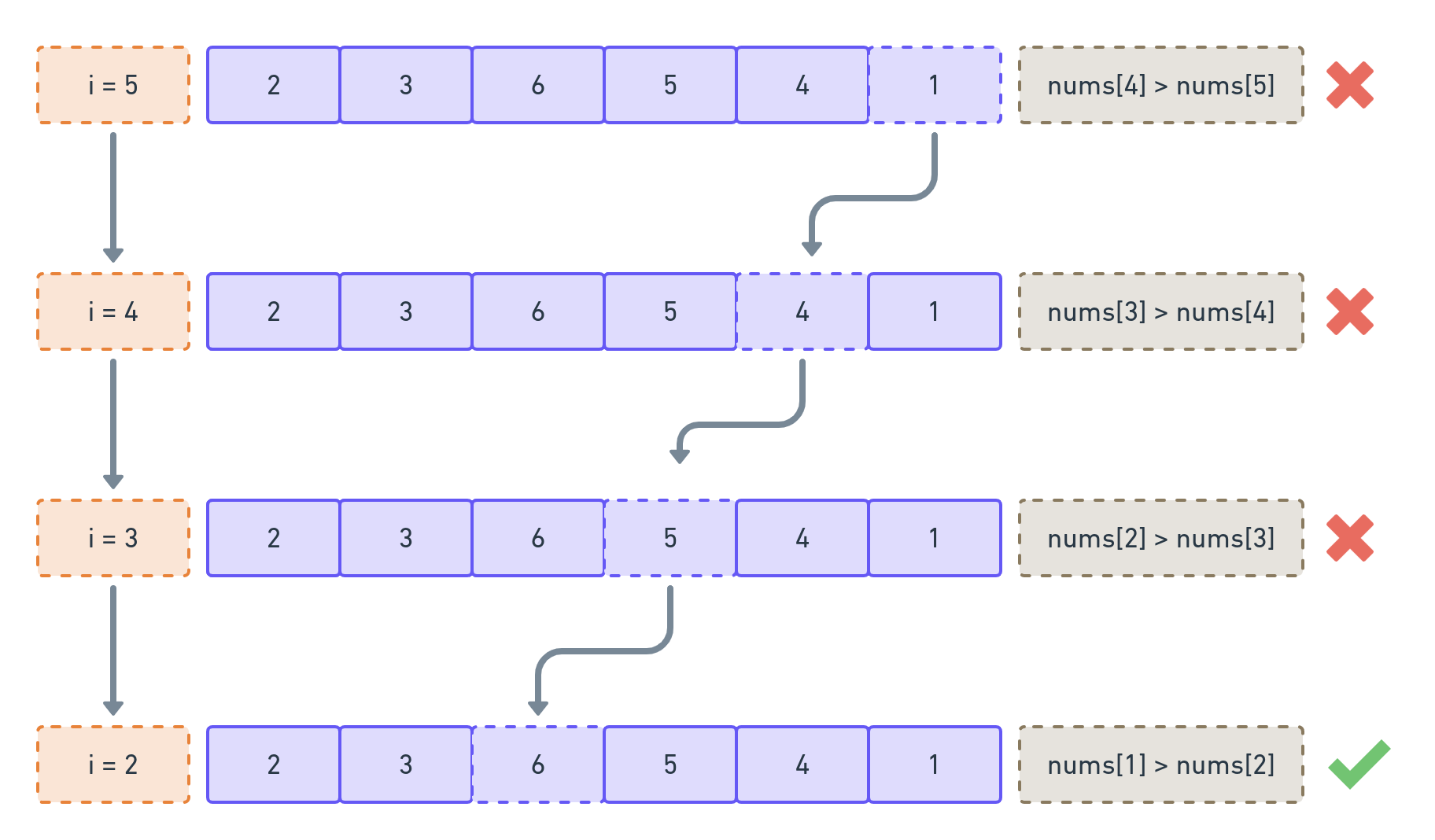 This condition is met when i = 2 and the Smaller Candidate is 3 ( located at [i - 1]). Now, we do another right-to-left sweep. This time, we need to find the first element that is greater than 3.

This gives us 4. We swap their positions and arrive at the array: [2, 4, 6, 5, 3, 1]. We need to now re-arrange the digits starting from the 2nd index. This can be done by simply reversing their order.

Here’s the code implementing the above approach: