In this post, I discuss about building a simple Lisp interpreter, written in JavaScript, supporting basic Clojure syntax.

To prevent this kind of confusion, there is a collection of rules, called operator precedence, that have evolved ever since the introduction of algebraic notation, that dictate the order of precedence among operators. These rules are often abbreviated as BEMDAS, to signify the order among some of the common operators: Brackets, Exponents, Multiplication, Division, Addition, and Subtraction.

Just like in arithmetic expressions, it can get equally confusing for the compiler of a programming language to evaluate expressions with multiple operations. To this end, most programming languages come with their own rules regarding operator precedence, to ensure consistency and uniformity, while executing programs. For example, in the case of JavaScript, the assignment operator has one of the lowest precedence while expressions inside a grouping operator (( )) have the highest precedence, meaning that sub-expressions that are grouped inside a pair of parentheses will be evaluated before the rest of the expression.

An s-expression essentially contains two building blocks: lists and atoms. An atom is the basic unit of the expression which is not divisible any further. Each atom is differentiated from another by the use of spaces. In the above examples, the numbers 2 3 and 4 are atoms. Other data-types, like strings and boolean values can also be an atom. A variable can also be an atom.

A List refers to each block or segment of an s-expression which is contained within a pair of parentheses. The first atom in the list signifies a function or an operator. Thus, if f represents a function and args represent its arguments, the syntax of a list can be represented as follows: (f arg1 arg2 ... argn). Following this syntax, a simple list would be (+ 1 2). A list can be nested inside another list. Thus, a list can be composed of one or more atoms and/or other lists.

Lisp was the first programming language to follow this “fully parenthesized prefix notation” (s-expressions). Lisp, which is loosely derived from the term “List Processor”, was developed by John McCarthy in 1960. Thereafter, many flavors and dialects of Lisp have emerged. Of these, Common Lisp and Clojure are two of the most well-known dialects of Lisp.

Clojure is highly prevalent in modern times as seen in the latest Stackoverflow survey. It is a programming language built on top of Java which provides a Lisp syntax for writing programs. The dialect of Lisp for which this project is building an interpreter for, relies on part of the Clojure syntax.

The goal of this project is to write a tiny version of the Clojure REPL, which can perform certain basic mathematical operations.

REPL stands for read-eval-print-loop. It refers to an interactive programming environment, that takes an input from the user, evaluates it and prints the result. Once a result is printed, the environment goes back to the read state to accept fresh inputs from the user, thereby creating a loop. The shell prompt on Unix-based systems is like a REPL.

The project will evaluate valid s-expressions. If expressions are incomplete (eg., unclosed parenthesis) or if they are not written as per the syntax of an s-expression, an appropriate error message will be displayed.

The project also handles variables. To initialize a variable, the keyword def should be used. This keyword acts as an operator and accepts the following two arguments: name of the variable and its value. Here’s how variables can be initialized: (def nameOfVariable 9). The same variable can be re-initialized with a new value in a single s-expression. Further, during a REPL session, once a variable has been initialized in one s-expression, it can be re-used in subsequent s-expressions.

An s-expression may contain two disjointed s-expressions, such that there is more than one resultant value at the end of evaluation. For example, in the following expression, (+ 7 8) (* 1 10), there are two values: 15 and 10. The project is implemented to only display the right-most result. In the above example, 10 will be displayed.

To run the code of this project, this Github Repository will need to be cloned:

The necessary dependencies to run the project needs to be installed:

To run the project (Node.js needs to be installed):

Here’s a live in-browser demo of the project, compiled from Node.js using webpack and babel:

How expressions are read

The aim is to convert the input string (containing a sequence of characters) into a tree that expressly sets out the structure for evaluating each list in a valid expression. This is called LR parsing. To do this, the input string is read from left-to-right, without ever going back.

While traversing through each character in an expression, each collection of characters forming an atom is grouped together. This can be achieved as spaces demarcate atoms from one another. Also, a closing parenthesis implies the end of an atom (as it is not mandatory to use a space between an operand and closing parenthesis).

When an atom is parsed, it will be pushed to a stack. Once all the atoms of a list have been parsed and the list is complete, all the atoms belonging to that list will be popped from the stack. As every list is enclosed between a pair of parentheses, whenever a closing parenthesis is detected (while going from left-to-right of the input string), it would imply the end of a list. Thus, when a ) is detected, all the atoms pushed to the stack (thus far) will be popped out of the stack. As only the atoms of the current list should be popped, the popping should stop the moment a ( is popped. This would signify the beginning of the current list.

Once all the atoms of a list are popped, the list is evaluated. This is done by passing the collection of atoms comprising the list to an evaluator function. This function will first interpret the meaning of each atom. For example, if an atom contains digits, it will call the appropriate function to convert that atom into an integer. Similarly, it will convert the operator symbol to its corresponding function. Once this process is complete, it will call the relevant operator function and pass the set of operands belonging to the current list. The return value will be pushed back into the stack.

First, the * operator will be pushed to the stack, along with the opening parenthesis (. Then, the following atoms will be pushed: 1 ( * 5 and 6. (For the sake of simplicity, the parentheses are not shown on the syntax tree). 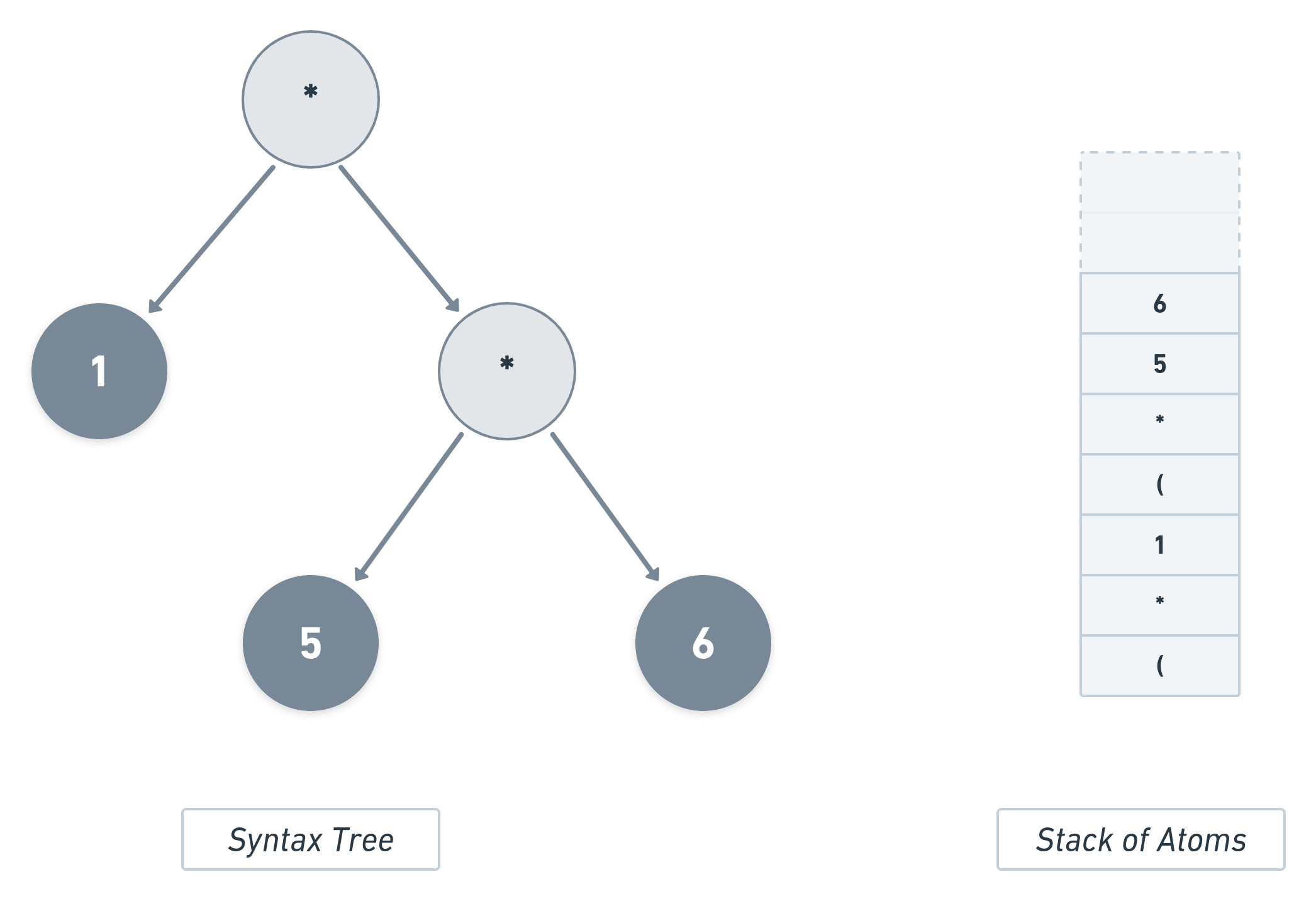 Now that there is a ), it will signify the end of the current list. So, all the atoms of the present list will be popped, namely 6 5 * and (. In place of these atoms, the value of (* 5 6) will be pushed into the stack. The syntax tree would now look like this: 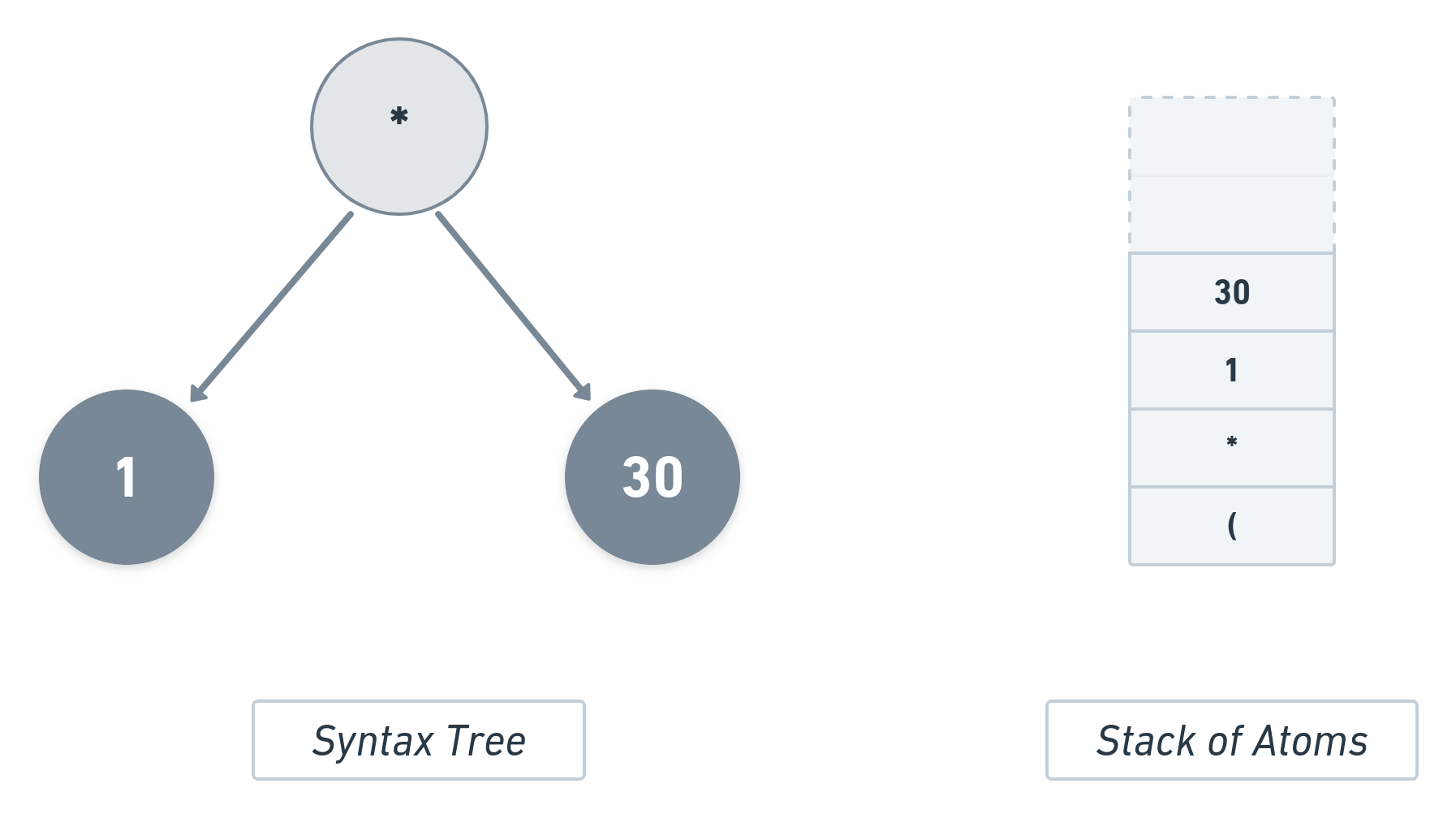 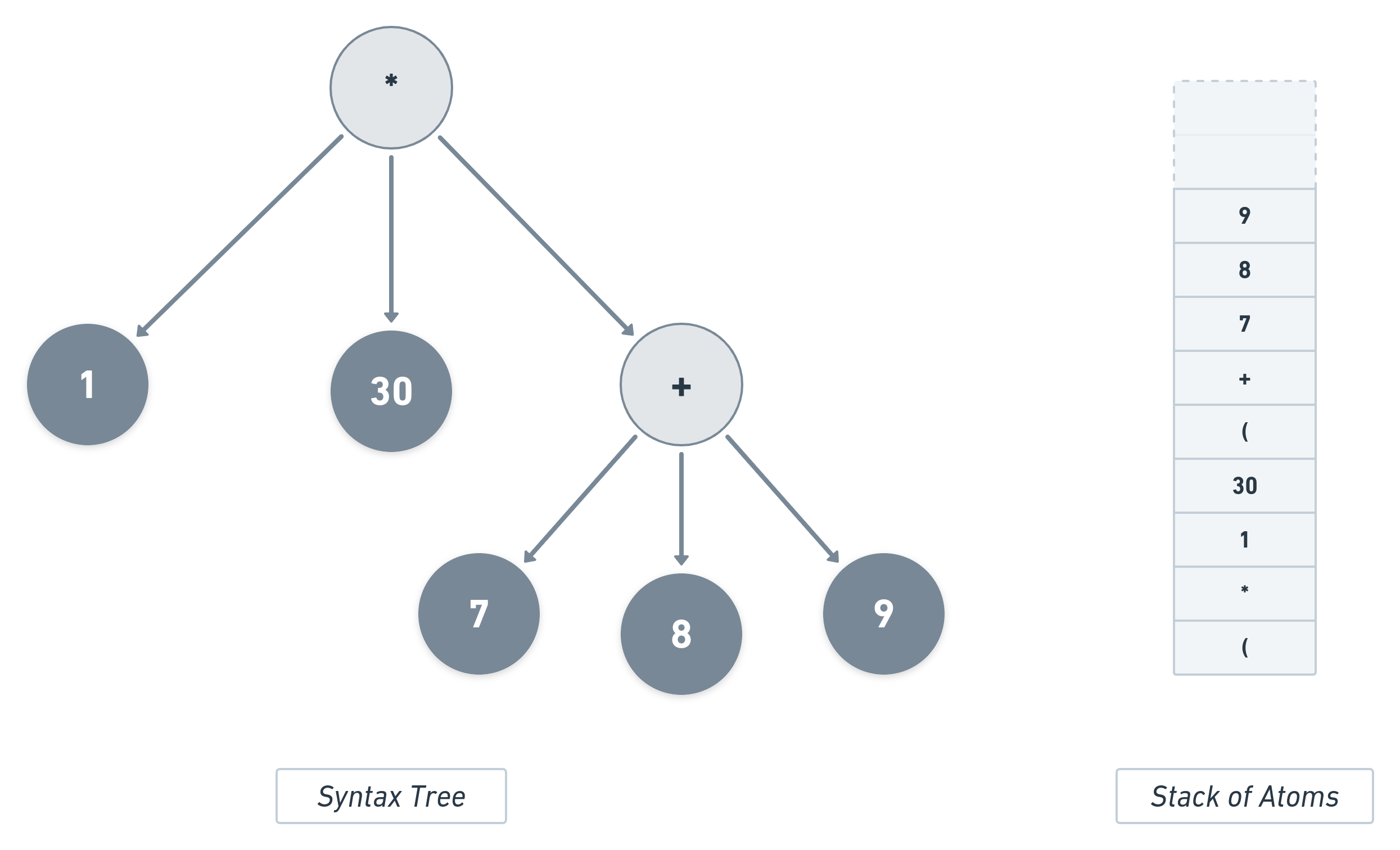 Again, the presence of ) would signify the end of the current list. So, all the atoms of this list will be popped and their result will be pushed into the stack. Finally, the penultimate atom, 10 will be pushed and then all the remaining values in the stack will be passed to the multiplication operator along with 1.

Now that there is no other element left in the expression, the return value of this function call will be the final output, i.e., 7200. 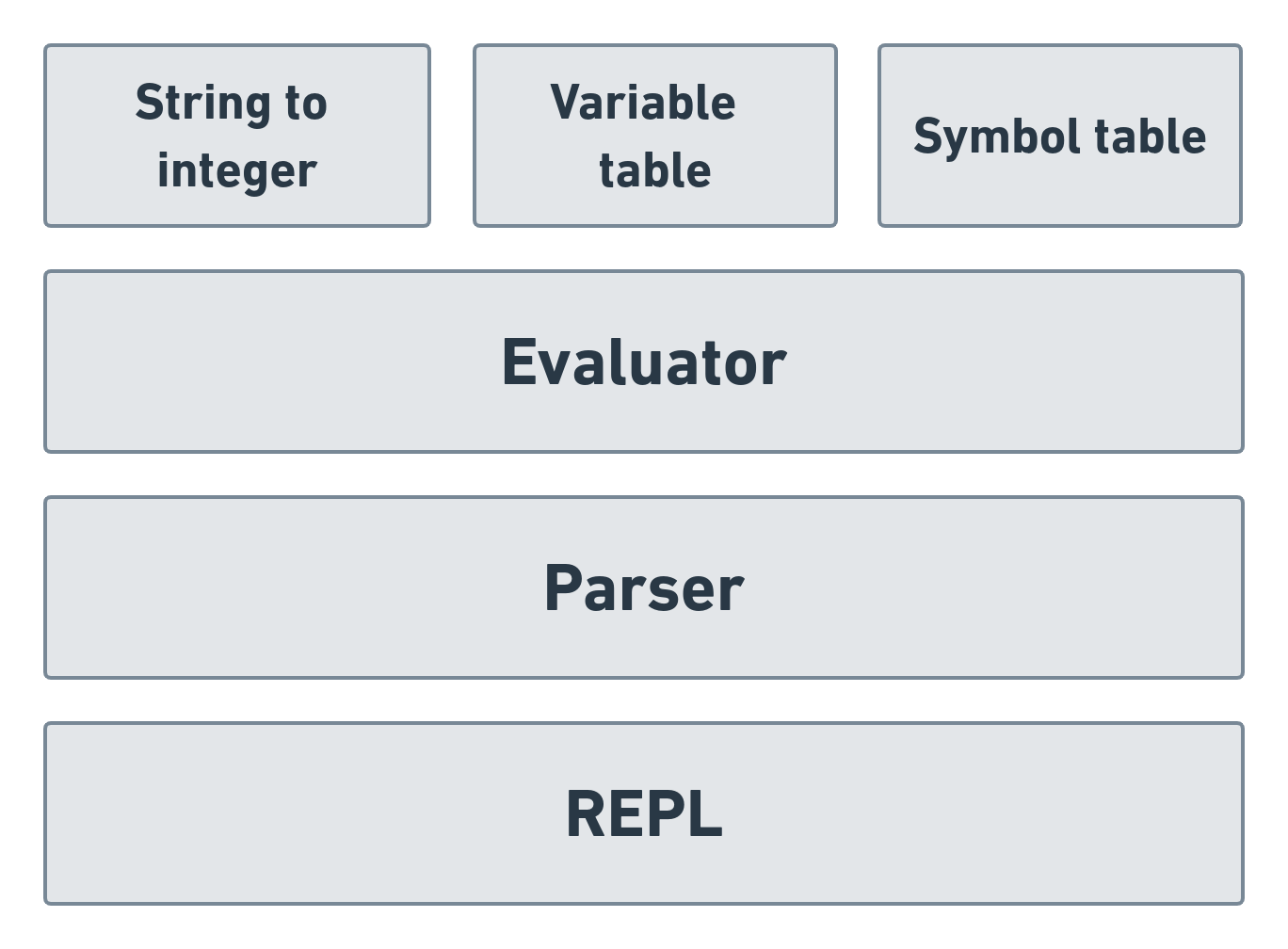 The project can be divided into three main components:

REPL: REPL runs the interactive environment. It accepts inputs from the user, passes it to the parser component and displays the final result, once it is generated.

Parser: The parser component parses each atom from the input string, by going from left-to-right. Each atom is stored in a stack data-structure. Once a list is formed, it transfers all the atoms of that list from the stack to the evaluator component. The value generated by the evaluator is pushed into the stack.

Evaluator: The evaluator component receives all the atoms of each list in the input expression. It checks if any of the atoms contains any digits and converts them into integers, accordingly. It converts the operator symbols and intialised variables to their respective values. Once each atom in a list has been tokenized, it evaluates the list expression and returns the result.

Lisps are vast and have many features that are not implemented in this tiny project. The goal was to have a first version of a Lisp interpreter that could do the basic operations. Some of the main missing features that could be the first to be added to this are:

The project is hosted on this GitHub repository. Pull requests for the above improvements (or anything else) would be highly appreciated!