In this post, I write about how I solved a LeetCode problem that required implementation of binary search in a sorted array.

However, the program should have a run-time complexity of O(log n).

What does O(log n) mean?

O(log n) refers to the Big-O notation. Simply put, the Big-O notation is used to loosely represent the relationship between the size of the input and the amount of time an algorithm will take to be executed. In other words, “How does the number of steps change as the input data elements increase?”.

The number of operations to be executed in an algorithm can also be independent of the size of the input data-set (e.g. finding the ith element in an array). Such algorithms have O(1), i.e., the run-time of the algorithm will be constant, and not be dependent on the input-size. (As this post is not on Big-O notation, I will reserve the discussion on Big-O for another post).

When an algorithm is said to have a O(log n), it means that the rate at which new operations (or steps) have to be carried out is a fraction of the rate at which new inputs are added. In other words, where, the input size increases by four times, but the number of additional operations only increases by two times, the algorithm will have a logarithmic time-complexity, or a O(log n).

Contrast this with algorithms with O(n), where for each increment in the input size, there is an equivalent increase in the number of operations. Or, take the case of algorithms with exponential time-complexity, which have a multiplier effect (like the rate of spread of a viral pandemic), where for n new inputs, there are c^n new operations (where, c is a constant that is greater than 1). In other words, for every increment of the input size, there is a greater corresponding increase in the time-complexity of the algorithm. As we have seen in the case of the global pandemic, exponential functions grow scarily fast. Logarithmic functions, on the other hand, can be described as inverse-exponential functions: for every n new inputs, there are less than n new set of operations. Thus, logarithmic functions grow at a very gradual pace. To illustrate this, in the following graph, the blue curve represents an exponential function (y = 2^x), the green curve represents a linear function (y = x) and the red curve represents a logarithmic function (y = log2 n). 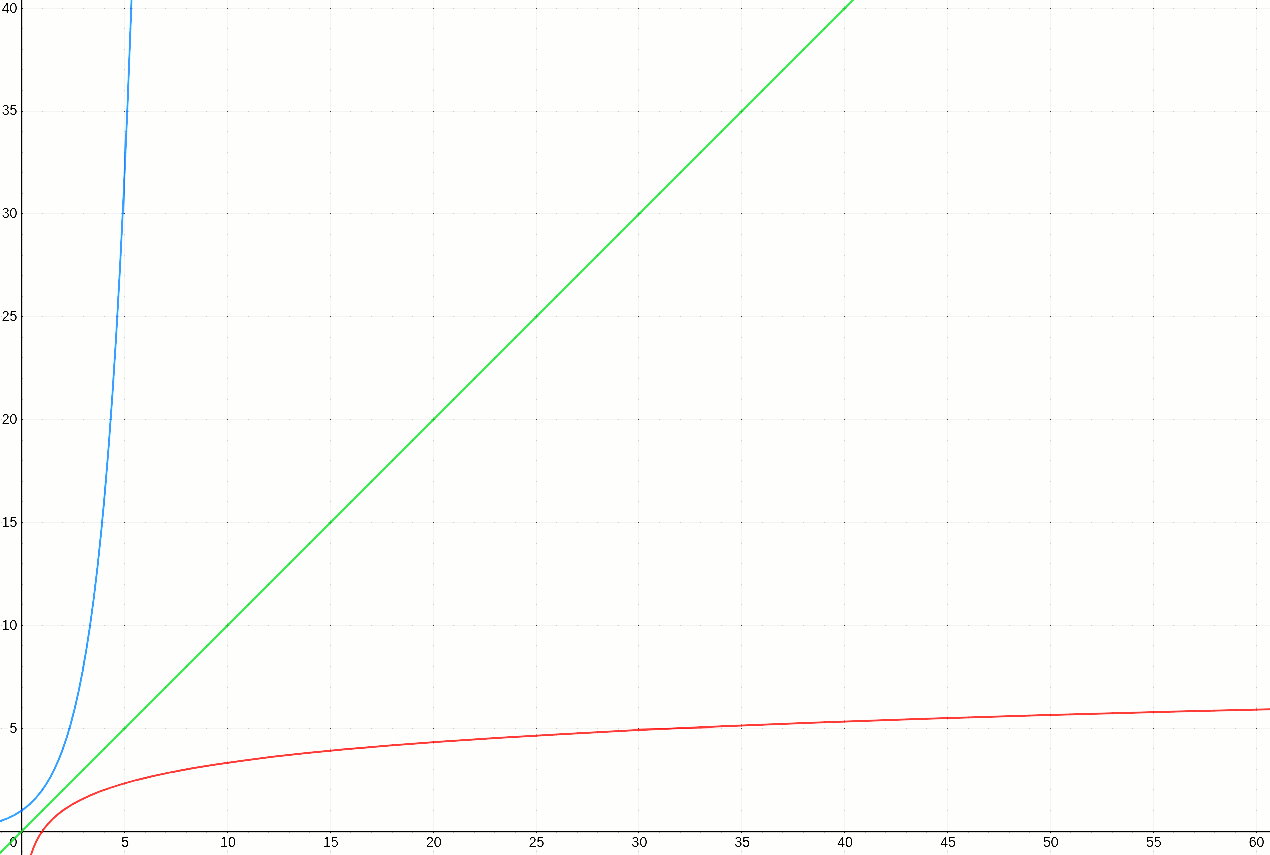 Relevance of O(log n) in the current problem

It is quite simple to write a program to find whether a target value exists in an array and to return the correct index position of the target value, if it is not present in that array:

However, this will have a time-complexity of O(n). Note that, the Big-O notation always depicts the worst-case scenario. Thus, in the above example, when the target is the last element in the array, the for-loop will run for the entire length of num. So, the number of operations is directly proportional to the input-size.

To do the same task, but with significantly fewer operations in relation to the size of the input, we cannot simply iterate through the entire array and compare each element of the array with the target value. To carry out a search that has O(log n), we will need to implement a binary search.

During each iteration of a binary search, we divide the data-set into two halves, and then divide one of the halves into two further halves. The selection of the halves are determined by comparing the element in the middle with the target. This continues, till we reach the target, or when we are left with an empty data-set.

Here’s how to implement a binary search:

In the above example, at each iteration of the while-loop, the mid-point element of the array is compared with target. If target == nums[mid], mid will be returned. Otherwise, target will be compared with nums[mid], as shown above.

There are two important points to note:

Does binary search have an O(log n)?

While running a binary search, at each iteration, the size of the data-set shrinks by half. Assuming the worst-case scenario (i.e., when the target value is in at the index when low==high is true, i.e., when the data-set will be containing only one element), the number of elements remaining to be checked changes (at each iteration) as shown below:

First, we have n elements to check, then by looking at the middle element of the sorted array, we throw away half the array. Now, in the selected half, we have n/2 elements, which again is halved. This continues until we have only one element remaining to be checked.

The above expression can be expressed in the following manner as well:

Thus, in the worst-case scenario, the total number of operations will be x:

By definition, this can be expressed as:

But the LeetCode problem at hand also requires us to accurately return the index where target should be inserted in the array nums, if it is not present already.

In the example above, when we reach the last round of the while-loop, when low==high is true, the index represented by low and high indicate the index that is nearest to where target should be present in the array.