A graph is an abstract data structure consisting of a set of vertices, each of which are connected to one or more other vertex. In this post, I explore this data-structure and implement some of its common operations.

What is a graph?

Trees represent hierarchical relations. They will always have a root which may have one or more sub-trees. A tree is, in fact, a special kind of graph. A tree is graph without cycles. To put it in another way, in a graph, it is permissible to connect any vertex (irrespective of where they are) to any other vertex in the same graph. As there is no specific restriction or order in which vertices need to be connected to each other, there can be multiple paths (also called ‘edges’) between two given vertices. But, in the case of a tree, each node will have only one specific route to reach another. 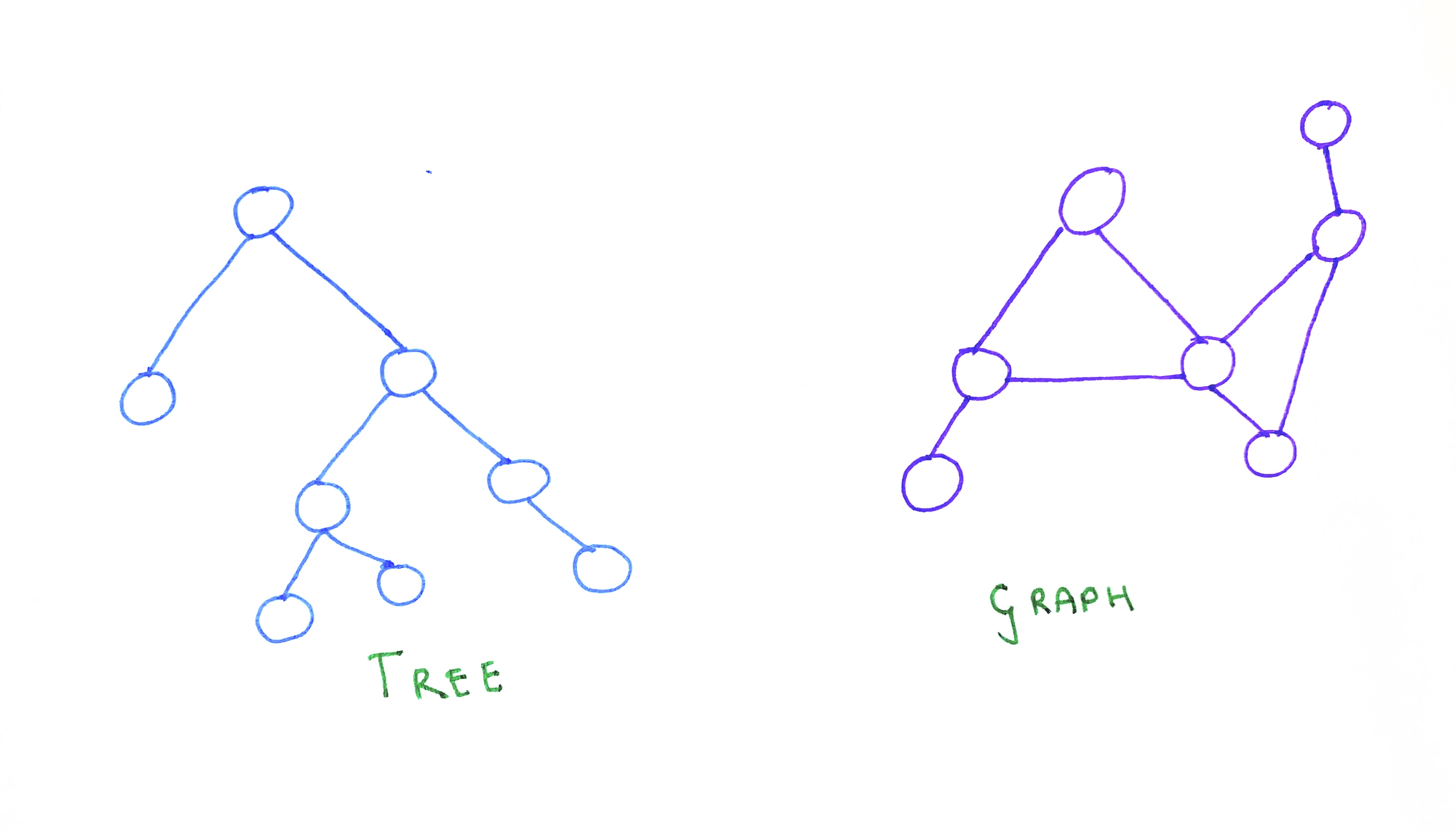 While writing programs, there are largely two ways of representing a graph:

An adjacency matrix is relatively more efficient to represent graphs which have a dense network of paths. It allows for quick look-up and updation of new paths. But, it also takes up substantial space, especially when the number of paths is relatively low. For example, in a graph representing a social networking site, the total number of users (vertices) may be in the millions, while each user may have only a few hundred connections(paths). If we use an adjacency matrix to represent this graph, a substantial majority of the cells of the matrix will be empty.

To create new vertices, we need to call the constructor Graph along with the new keyword. To add new neighbouring vertices to a given vertex, we need to add pointers to such vertices in the .addNeigbors method.

Traversing through every vertex of a graph is one of the most significant operations involving a graph, as it is the only way to determine, for example, if a graph contains a specific value, or if a graph is cyclical etc.

There are two way to traverse through a graph, as explained below.

According to this method, we start with searching within a given vertex (which can be any arbitrarily chosen vertex, as it is not necessary to have a specific root node in a graph), and then visit any one of the neighbouring vertices of that vertex. Then, if that vertex has any neighbouring vertex, we visit any one such neighbour. We continue this, till we reach a vertex with no neighbours, that have not been visited already. Then, we trace back to the penultimate vertex, and visit another neighbour of that vertex. We continue this all the way upto the the first vertex. The traversal ends when either the specific value being searched for is found or till every single vertex has been scanned once. Thus, in a depth-first search, at the level of a given vertex, we will first recursively visit each neighbour’s neighbours, before moving on to other neighbours’s neighbours.

In the above program, we first log the data contained in the vertex passed to the function dfs. Then, we run a for-loop to iterate through all the neighbours of that vertex. For each neighbour, we first check if it has already been visited. If not, we call the dfs function by passing that neighbour. The for-loop will terminate only after the dfs function is called for every un-visited vertex of the vertex that is passed to the function, during a given call.

As graphs can be potentially cyclical, it is very important to ensure that a vertex that is already visited, is not visited again. As otherwise, the search may never complete. To this end, Set object is maintained, called visited, which stores all the vertices that have already been visited.

In the case of binary search trees, we often implement a pre-order, a in-order, or post-order traversal. In each of these traversals, we visit the left sub-tree of a given node, before visiting its right-sub-tree. We do this recursively for each sub-tree within a tree. Thus, as we first go to the a neighbour’s neighbours (or, in the case of trees, children’s children) before visiting the other neighbours (or children), each of these traversals are examples of depth-first search.

In the above program, the array q is used to enqueue and dequeue each vertex and a Set object, visited, is used to store each vertex that has been visited once. Importantly, a neighbour of a particular vertex will be enqueued only if it has not been visited.

If we need to clone an existing graph, we can use either of the two traversal methods, to visit every vertex of a given graph. To clone a graph, we will need to create identical copies of each vertices of the graph. Thus, each time we visit a vertex, we should create a new (cloned) vertex, and store the value and the neighbours of that vertex.